Alpha-EEG – neuron populations firing at frequencies between 7.5Hz and 12.5Hz

Previously on YBHMTYT (Your Brain Hears More Than You Think), you were presented with evidence that humans respond to sound waves at frequencies up to 50k Hz. According to researchers at ATR:

“Although it is generally accepted that humans cannot perceive sounds in the frequency range above 20 kHz, the question of whether the existence of such ‘inaudible’ high-frequency components may affect the acoustic perception of audible sounds remains unanswered. In this study, we used noninvasive physiological measurements of brain responses to provide evidence that sounds containing high-frequency components (HFCs) above the audible range significantly affect the brain activity of listeners.

“Psychological evaluation indicated that the subjects felt the sound containing an HFC to be more pleasant than the same sound lacking an HFC. These results suggest the existence of a previously unrecognized response to complex sound containing particular types of high frequencies above the audible range. We term this phenomenon the “hypersonic effect.” (Oohashi 2000)

That last bit intrigues. If you were one of ATR’s business partners and you got the good news that people turn music up when it’s hypersonic, wouldn’t you pony-up for another neuroscience study? You bet you would. In 2006, the research team was given a green light to take the hypersonic effect to the next level. Their experiment design discussion might have played out like this:

Grad Student: “They not only respond, they appreciate it more. We know this because they’ll turn up the volume for hypersonic music.”

Post-Doc: “Also, we’ve seen a significant difference in alpha-EEG signal (7.5-12.5 Hz) for brains exposed to hypersonic music as compared to silence or standard music. That means the effect is real.”

PI: “But since the human auditory system seems to have adapted to use only frequencies under 20k, how are people getting hypersonic information?”

PD: “Well, I suppose we could take ears out of the equation, like make the subjects temporarily deaf or something.”

PI: “I’ll never get that past the IRB. Not even gonna try.”

GS: “But couldn’t we isolate the ears from the rest of the body somehow? Give two presentations, ears only or full body for hypersonic or regular music.”

PD: “Yeah, and we could cover-up the body for some of the trials.

PI: “Now you’re talking! We’ll split the high and low components like we did before, but we’ll play them through speakers and/or earphones with the body exposed or covered. We’ll run ‘em through the EEG and behavioral task. Let’s do it!”

Which leads us to today’s review. Please note – all images in this article were fabricated by the author from freely-available resources. No copyright holders were harmed.

Neuroimaging. Human brain activity was measured with electroencephalography (EEG) across 12 scalp sites during exposure to a super-audio CD (SACD) recording of Gambang Kuta, an Indonesian folk tune performed by the internationally-known gamelan orchestra Gunung Jati. (This is the same stimulus used in Oohashi 2000.)

Behavioral measurements. Subjects also engaged in a behavioral task during each trial, which was to adjust the music loudness to a comfortable listening level (CLL) using an up-down switch to operate a motorized fader between the SACD player and a pre-amp.

Stimulus. Capturing and playing hypersonic music is easy, especially if you own a proprietary high-speed one-bit coding signal processor with an A/D sampling frequency of 3.072 MHz like the Authentic Signal Disc ARHS9002 and Authentic Hypersonic Sound System (Yagi et al, 2002). As before, the signal was split into two bands, everything <22k and everything >22k (Fig. 1). 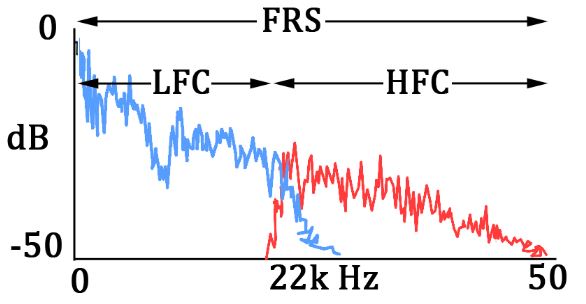 Conditions. Now that they had the signal split, investigators could present three different stimuli (FRS, LFC and HFC) under three conditions (earphones, speakers with subject’s body exposed, speakers with body covered). The subsequent four sub-experiments chosen are explained in Table 1 and Figure 2. 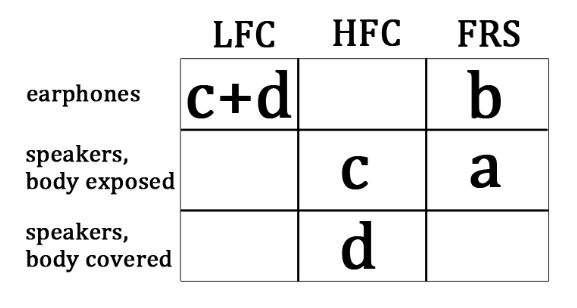 Table 1. Table of 3 stimuli and 3 presentation conditions. For each treatment, LFC and HFC were played either alone or together during different trials.

Neuroimaging. Alpha-EEG was significantly greater for FRS (as compared to LFC alone) when HFC was played over speakers (Fig 3a and 3c). When the subjects’ bodies were covered, alpha-EEG power was significantly diminished (Fig. 3d).

Behavioral. Measurements of subject behavior paralleled EEG results. Subjects usually adjusted loudness to significantly higher CLLs during FRS when HFC was played over speakers (Fig 3a and 3c). Conversely, subjects set CLLs at similar levels when during FRS when HFC was played through earphones. When a body surface was insulated from HFC coming through speakers, CLL was much lower.

The hypersonic effect is real, but it only works over speakers. And although this study shows that listeners tend to crank it up when hearing hypersonic music, subsequent research established that listeners could hear no qualitative difference between enhanced SACD and standard CD formats at normal listening levels. That finding might have dampened enthusiasm for marketing hi-res music to a general audience, but one can still purchase SACD players and find tons of great music on SACD.

And anyway, as Duke Ellington tells us, “If it sounds good, it is good.” You like it? Play it.

Next time, let’s talk about how your brain lives in the past.

FiDef and the Future of Music
Scroll to top